Zoe Goss : Who broke the Ice for Women

Zoe Goss : Who broke the Ice for Women

Cricket, wrote Christopher Douglas, the biographer of the controversial English cricketer Douglas Jardine, is a game that teaches its pupils to be “honest, impervious to physical pain, uncomplaining and civilized”. As society tends to become more and more civilized with every passing second, women also have been taken by cricket under its grasp.

Now cricket is not only a men’s game but women also have their share in it.

But it was not always the same. Though Women cricket has its own rich history it has never given the respect it deserves. But the Cricket God has another plan. It was an exhibition match on 1994, but it featured some big names nonetheless. The teams, named Bradman XI (consisting of Australians) and World XI (featuring mostly non-Australians), featured several superstars, most of them from yesteryear.

Rugby league player Paul Vautin was selected to play for the Bradman XI but he withdrew due to his illness. That gave Zoe Goss, a member of the Australian women cricket team that won the 1988 world cup, a chance to show her skills.

Batting first Bradman XI was 151-4 when Zoe Goss came into the middle. She was tested several times by leggie Abdul Qadir. But she stuck in the middle and fought for every run. But as World XI skipper bought Sunil Gavaskar and Barry Richards, it made life better for Goss. She scored 29 off 38 balls until was stumped by Jeff Dujon off the bowling of Brian Lara. But it was not the end of the heroic of Zoe Goss.

She came to bowl in the25th over when the score was 100/3 for the World XI. Lara faced her bowl and defended the first ball respectfully with a smile. In the 31st over Goss delivered a pitch of a delivery. With her medium pace she conceded a boundary in her previous ball, but this time the ball pitched on the off stump line and was leaving the left-handed Lara. 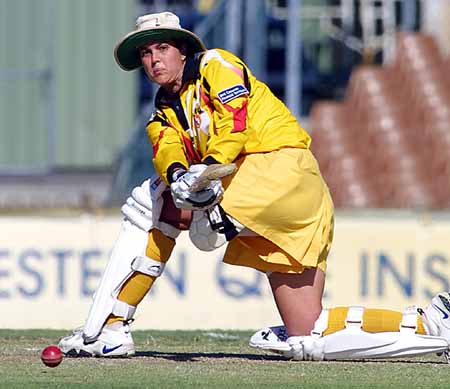 He wanted to play the ball on the up but he missed the ball to found himself stumped by the wicketkeeper. Again in 37th over in a ball which was away outside off stump, Dujon rightfully flashed hard but only found to be caught at point by Lillie. She incidentally claimed the invaluable wickets of both Lara and Dujon while World XI was chasing 270 to win. Her bowling figure showed 10-0-60-2.

Eventually, World XI lost the match by 1 run. But as Nevil Cardus said scorecard is nothing but a piece of scrap, this match will be remembered for the presence of Zoe Goss in the match rather than win or loss. England international Sarah Taylor played for an Australian A grade cricket men’s team in 2015 but Zoe Goss achieved that feat much before that.

But as I have mentioned earlier that scorecard is nothing but a piece of paper, Zoe Goss should not be remembered by the stats and the records. She was one of those players who played in the men’s game. We should pay homage to her as a player who always looks beyond her age and broke the barriers of Women cricket. And through this broken wall, players like Sarah Taylor are carrying forward the legacy of her.