Former Australian cricketer Belinda Clark had an illustrious career and will be a source of inspiration for generations to come. 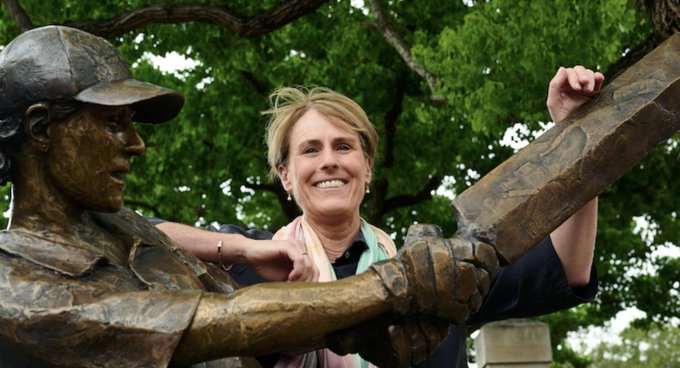 Former Australian cricketer Belinda Clark had an illustrious career and will be a source of inspiration for generations to come. One of the stalwarts of women’s cricket, Belinda Clark, received a huge honour on Thursday. She was immortalized as a sculpture of her was unveiled outside the Sydney Cricket Ground (SCG).

Those present at the momentous occasion witnessed history unfolding in front of their eyes. This is the first sculpture of a female cricketer in the world. It has to be said that the ICC Hall of Fame member richly deserved the honour.

The Sydney Cricket Ground is home to the world’s first sculpture of a female cricketer, with Belinda Clark immortalised in bronze at the venue’s entry.

The 52-year-old was present during the unveiling that took place moments before the start of play on Day 2 of the third test between Australia and South Africa. Clark was joined by many of her former teammates. A few players from the current Australian squad were also in attendance.

Belinda Clark played 15 tests, 118 ODIs, and a solitary T20I in her international career. She made her debut in international cricket in 1991 and retired in 2005. She was understandably overwhelmed after receiving the honour. The right-handed batter said that the sculpture stands for being courageous and having an affinity to taking challenges.

“The sculpture encapsulates being able to have a go–to be courageous, to take on those challenges and break convention. I want people to take away that you can do anything you want if you put your mind to it and you have good people around you, and I think I’ve been very fortunate to have had great support and have a bit of an imagination to take my game where I wanted to take it, and hopefully the sport is in a better place for it.”

Players will surely gain extra motivation when they will come to play a match at the historical SCG and see the statue of the legendary Belinda Clark.