WBBL 07 Day Wrap: Bowlers Day Out As They Win Matches For Their Respective Teams 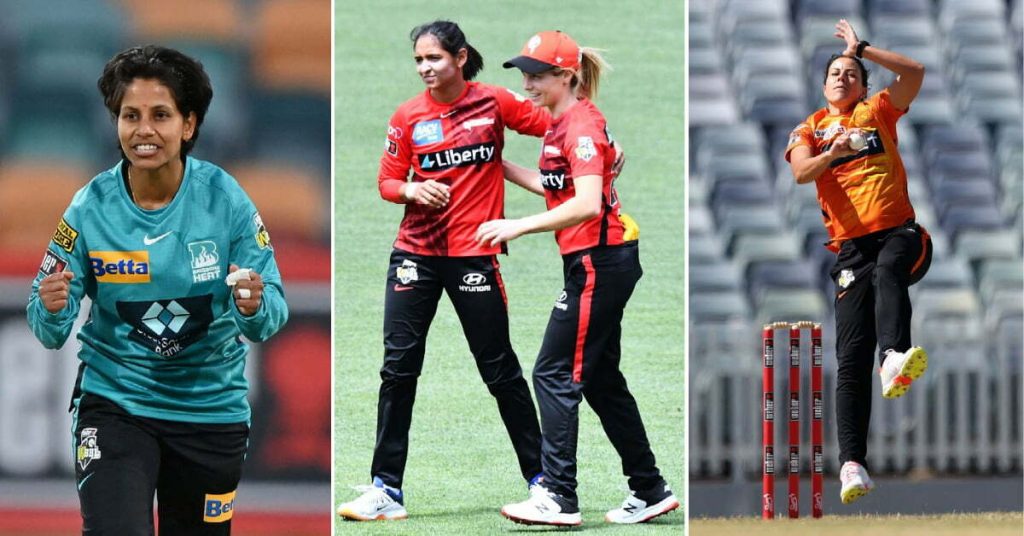 WBBL 07 Day Wrap: Bowlers Day Out As They Win Matches For Their Respective Teams

The big Sunday of the Women’s Big Bash League (WBBL) saw three matches, ended with a winning point for Brisbane Heat, the Melbourne Renegades and Perth Scorchers each as well.

Spin duo Harmanpreet Kaur and Sophie Molineux handed over Melbourne Renegades a comprehensive win against their rivals from the same town. After bowling out Melbourne Stars for a mere 103, Jemimah Rodrigues and Carly Leeson helped to chase and let the table-toppers register their 7th win in 10 games.

Winning the toss and deciding to bat, the Stars had a slow start and at the same time lost early wickets of the likes of Villani, Lanning and Sutherland, as they were trailing at 41/4 in the ninth over. A fighting partnership of 42 runs between Kim Garth (32) and Erin Osborne (29) helped them to reach 83/4 and still have 4 overs in the innings. At the stage, it appeared that some big overs might take the match to fight total. However, Harmanpreet Kaur and Sophie Molineux kept picking wickets and allowed the score to reach only 103

While chasing, in the second over itself, Tess Flintoff got Evelyn Jones bowled for a duck. But then on, Jemimah Rodrigues and Carly Leeson put up a strong partnership of 81 runs to steer the game smoothly in favor of the Renegades. Rodrigues struck six fours for her 38-ball 45 while Leeson hit five fours in her 33-ball stay for 41. Kim Garth was the pick of the bowlers as she picked both Rodrigues and Lesson while giving away only 23 in her quota of 4 over.

In the other encounter at Adelaide Oval, Brisbane Heat found themselves getting back to winning after losing the last 2 encounters. Poonam Yadav’s for 3-17 and Georgia Redmayne fifty got Brisbane Heat to register their 5th win of the season as they stand second in the table with a 4-point difference from the top spot with one match played less. Sydney Thunders are now at the bottom of the table with only two wins from 8 matches.

Smriti Mandhana 37 (24) and Phoebe Litchfield 40 (32) gave a good start to Sydney Thunders with a score of 3/89 in 11 overs. They however lost the momentum and managed to reach only 123 in 18. The final two overs went for 10 from each over, to eventually reach a fighting total of 143. Yadav’s double-wicket first over, in which she dismissed Smriti Mandhana and Corinne Hall, led to the slowdown. She also picked the wicket innings top scorer Phoebe Litchfield on the other end.

In the response, Georgia Redmayne played wonderfully to reach her 57 off 45 balls. In the middle overs, Georgia Voll 25 (21) and Mikayla Hinkley 33 (25) ensured to keep the required run rate in check as Brisbane Heat chased the target in 18.2 overs. Captain Hannah Darlington was the only bowler who troubled the Brisbane batters as she ended up with figures of 3/21 from 4 overs.

In an encounter ruled by Pace at Perth, Scorchers got their two crucial points to stay in the top 4 on the table. On the other hand, Hobart Hurricanes have lost 6 now having already played 10 matches. They are currently placed 6th on the table but the teams on no. 7 and no. 8 have played 3 and 2 matches less respectively.

Put into the bowl first, Scorchers bowlers were right on the money right from word go. At the end of the first seven overs, Hurricanes were 20 for a loss of 6 wickets. Marizanne Kapp picked 4 and Sophie Devine picked 2 while Taneale Peschel also gave only 4 runs from her first 2 overs. Ruth Johnston came to the rescue as she scored 38 from 40 with the help of two fours and two sixes. With small partnerships at the tail end, Hobart Hurricanes managed to reach 96 by the end of 20 overs. Kapp ended with figures of 4/10 while Devine 2/15. Lilly Mills also helped to wrap up the innings as her figures read 3/18 in her three overs.

It was a small total to defend but Tayla Vlaeminck did her part to perfection. She was successful in getting both openers Beth Mooney 6(5) and Sophie Devine 11(7). Later she also picked Chamari Athapaththu 18(17) thus her bowling figures reading 3/21 in four. Chloe Piparo was the leading run-scorer with 29 off 33 balls. Marizanne Kapp also contributed with the bat to score 18 off 15 balls that included four boundaries. Perth Scorchers chased down the total of 96 in 15.3 overs.