‘Proud to See Her Transformation from a Player to a Coach’: Anju Jain on Devieka Palshikaar

‘Proud to See Her Transformation from a Player to a Coach’: Anju Jain on Devieka Palshikaar

Recently, former India cricketer Gautam Gambhir suggested that playing a lot of international cricket is not a prerequisite to becoming a successful coach. It can be guessed that a few eyebrows were raised if not many. In a sport known to thrill endlessly and gives priority to the male coaches, can one imagine a female coach could be successful too?

Like many, she also started with the gully cricket while the professional cricket came to her life very late. It was in the second year of college when she introduced to professional cricket. However, it didn’t take much time for her to get into the Maharashtra U-19 team where she played for 2 years before joining Air India.

She excelled while playing for West Zone U-19 team. While playing against North Zone U-19 team in 2000 at Rae Bareli, her throws successfully sent Surbhi Srivastava and Maninderpal Kaur in the dug-out. However, not only that but she claimed two wickets also. She came to bowl in the 40th over, despite giving 3 wides, she bowled Karishma Dhawan for 6 and trapped Anuradha before the stumps for a duck and ended up with the figure of 0.4-0-4-2.

She not only impressed with her bowling and fielding but also with her batting, scoring a stable 47 off 74 with 5 boundaries. On 3rd April 2000 against South Zone in Chennai, she made her debut in List A matches. Her performances in the junior level helped her getting a call from Air India which used to be one of the best teams in the circuit alongside Railways.

And that was the time when she had to choose between CA and Cricket. Of course, she chose cricket.

While playing for Air India, she hardly got the chance to play with the presence of Anju Jain, Anjum Chopra, Rumeli Dhar, Jhulan Goswami and a few – be it batting or bowling. Having started as a medium-pacer, it became difficult for her getting a chance to bowl. However, with the assistance of Smitha Harikrishna, she turned into a leg-spinner.

“She was a very slow gentle medium pace bowler, although her height suggested she could become a great medium pacer (Laughs)! But when she came and bowl it was very slow. At that time, we didn’t have any leg spinner in the team so we tried her and she did well. Again on a slower side but it was effective,” said Anju Jain to Women’s CricInsight, former India captain who is now a successful coach too.

The India team pose during the NatWest Series against England at The County Ground on September 9, 2008, in Hove, England. (Photo by Christopher Lee/Getty Images)

Devieka Palshikaar made her India debut on 2nd January 2006 against Pakistan in the Asia Cup where India sauntered to an easy 10-wicket win. While Mithali Raj and Rumeli Dhar sealed the deal inside 18 overs, it was Palshikaar, who finished with the remarkable figures of 3 for 12 from her 10 overs and became the Player of the Match. She was the highest wicket-taker in the domestic circuit that year which earned her the place in the India team.

To represent the country itself is a great achievement and what could be better if you become the Player of the Match?

In the domestic front, she was always among runs as well as wickets. On 5th December 2006, she achieved her best innings bowling in List A matches when she dismissed Reenaba Bachubha Zala while playing against Saurashtra. With this, she claimed her first five wicket-haul in List A matches – (9-6-8-6).

With the Inter-State Women’s Competition 2007-08 (West Zone), she achieved her first fifer in First-Class matches when she dismissed Shweta Nalin Dave while playing against Saurashtra in their first innings. She ended up having the bowling figure of 8.5-8-0-5 in the first innings while playing for Maharashtra.

She went on to play for India until 2008 before a back injury shattered her dreams of playing for India again and also in the World Cup.

In 2008, she missed Challengers trophy and the World Cup. However, she was regular in the domestic circuit. During the Inter-State Women’s Competition 2008-09 (West Zone), she smashed her first century in First-Class matches – 115 off 106 with 18 boundaries. Not only with the bat, but she excelled with the ball also while playing against Baroda.

ALSO READ: BCB Are in Search of a Coach Who Can Win Matches for Them: Devieka Palshikaar

It was then when her second innings began. NCA was conducting a level-1 coaching camp in Pune at that time and she attended that for personal knowledge. With much surprise, she did quite well and stood 1st in the exam. After that, her journey as a coach started.

She was given a small assignment in Assam for 1 month. At that time, she was not too happy with the Maharashtra Cricket Association. Despite being the second-highest run-getter after Mithali Raj she didn’t get the support from them. At that time Assam Cricket Association asked her if she could play for them and she grabbed the chance. 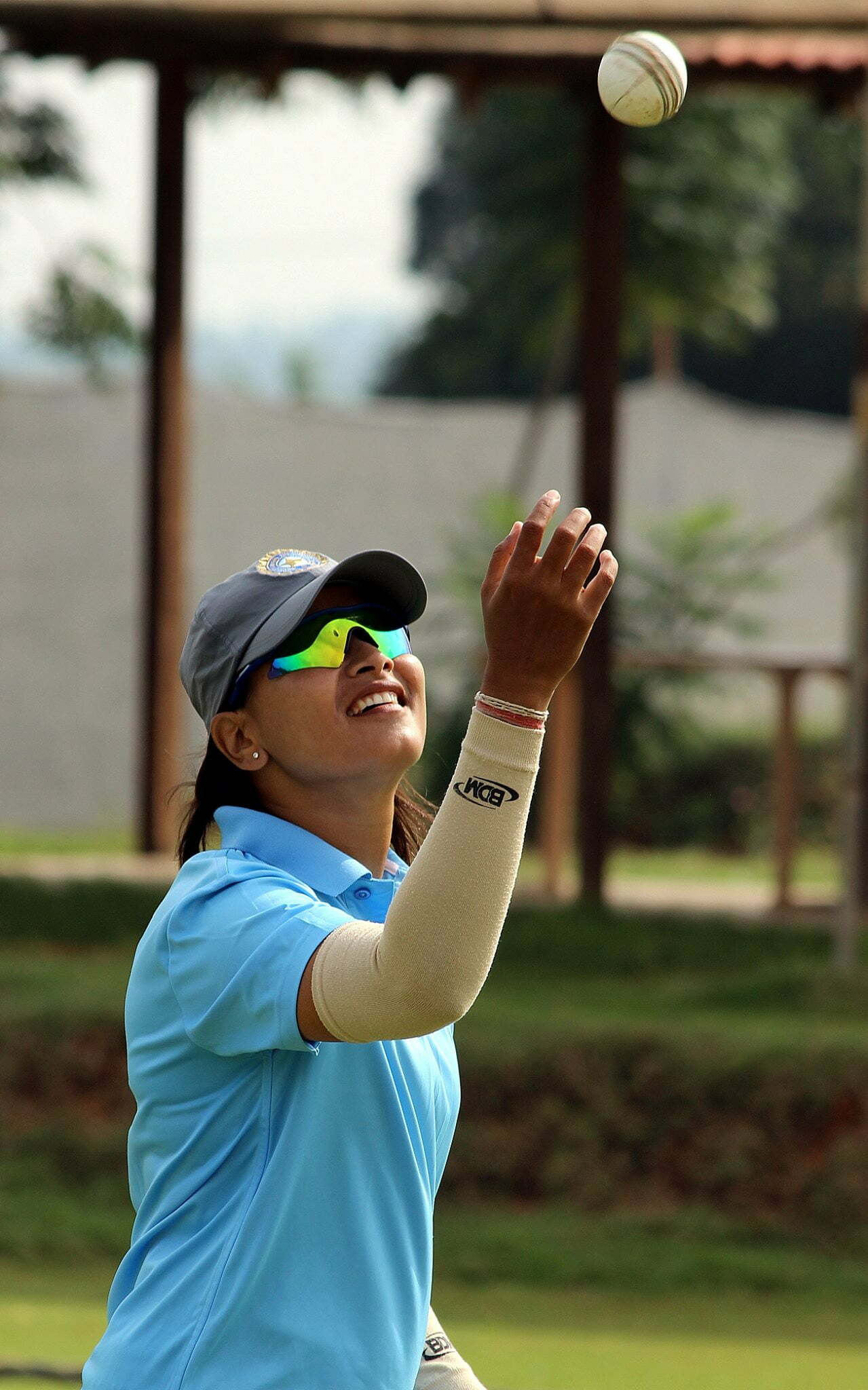 “It was my first experience as a coach, captain as well as a manager with Assam where I was handling everything single-handedly. They were so nice that I felt really good at working with them. I could see the respect in their eyes. It was like whatever I say they will do even if it’s wrong. They had that faith in me and that will always be special to me,” recalled Devieka Palshikaar during a chat with Women’s CricInsight.

“The very first day at the camp, I saw 96 girls while I was told there would be 30-35 girls. They used to be very punctual and they never gave me any chance to scold them. The memories are still so fresh,” she added. “First year, luckily we did well. We were U-19 runners up while Tripura and Assam used to fight for the bottom position at that time. Even we were the winner of the East Zone.”

As they say, catches win matches. They were on the verge of winning the game in the U-19 final but lost by 1 wicket against UP. She said, “It was a nail-biting one where our best fielder dropped the catch in the final ball and the batter took two runs. We could have won the game if she grabbed the catch.”

However, they became the winner after 2 years, in 2011 in her last year of coaching.

Along with the U-19 team, the senior team did well too where Assam successfully beat Mumbai for the very first time in the T20 format. She had played two years (2010-11) in this format for Assam where she hit the fastest 50 off 19 deliveries and ended up scoring 87 – her highest score in the T20 format.

Notably, it was the beginning of her many successful journeys.

After that, she took a year off and then joined Mumbai. Initially, she had to handle some troublemakers there but it was also a great season for her.

Her journey with Mumbai ended there as she doesn’t prefer to stay longer at the same place.

Well, as they say, One man’s loss is another man’s gain, Mumbai’s loss became the gain of Goa where Devieka Palshikaar stayed 2 years. However, a tough time was awaiting there too for her in the first year.

“We did very badly in the first year and there were talks about my credentials as well as the contracts. Luckily we did well in the second year where we beat Bengal in the final by 37 runs. It was tough to beat Jhulu (Jhulan Goswami) as they had Deepti Sharma in the team. The way she was playing just excellent. And to dismiss her was a great thing. Although we had plans when we played in Kalyani, it didn’t work out. Luckily we didn’t do the same mistakes in the final,” she recalled the final of 2017–18 Senior Women’s One Day League at Eden Gardens in Kolkata.

Post Goa, it was again an international team for her – Bangladesh, although it was not new for her as she was the assistant coach of India in 2014. In Bangladesh, she got the chance to work with her mentor, Anju Jain. With their guidance, Bangladesh reached a new height. From being minnows to win the Asia Cup and to nearly handed New Zealand a reality check in the ICC T20 World Cup earlier this year – they have come a long way.

While guiding teams to their respective goals, she has also evolved as a person and also as a coach. Like everyone, Jain too is happy as well as proud to see her growth. Notably, she is going to complete 11 years of her coaching career on 20th June 2020.

“From a player to a coach and completing 11 years, I would say her journey is really tremendous. The famous quality which comes with her that she is so much approachable and a very keen learner. You might have played at the highest level, but when you come to coaching, it’s a totally different thing altogether,” shared Jain.

“There are a lot who failed to transform well after becoming a coach but she has done it beautifully. Knowledge wise, qualification wise she has worked very hard on it and made sure that if I am taking the responsibility, I should be ready,” she further added.

The former India captain also revealed how her prodigy has become a successful coach.

“She is a very calm person and has lots of patience. She is a very happy going person who can adjust herself really well according to the situation. This is her biggest quality and I am very proud of the way she has grown up now and transformed herself from a player to a coach. The kind of knowledge she has, the way she carries herself and to hold on the good qualities are the best thing for Devieka,” Jain applauded Palshikaar.

ALSO READ: ‘To Win in the Big Stage, Bangladesh Need to Get the Mindset Right’: Anju Jain

On the other hand, Devieka Palshikaar, who started idolizing Anju Jain since her initial days of Air India, shared that she has learned almost everything from the former.

“I was 21 when I met Anju di. She was our captain and I started observing her since then. A very calm and cool person who respects everyone and never say a word in response. Unfortunately, I couldn’t learn the game from her where she was far better,” added the former leg spinner. “Although I try to do the time management like her, Anju di says I can do man management better than her. (she laughs!)”

As their stint with the Bangladesh team have ended recently, both Anju Jain and Devieka Palshikaar have joined Baroda Senior Team as the batting and bowling coach respectively. However, there is no news when the action will start again owing to COVID-19 pandemic outbreak in the country.

Meanwhile, she also revealed her desire to become a specialized pace bowling coach as she feels pace bowling is challenging.

“I want to do specialization on pace bowling. I found out that ECB gives the specialization in their level 4 coaching. Its been 10 years I completed my level B and don’t know when I can do that but I really want to be a pacer’s coach,” shared Devieka.

Bangladesh Players to Start Their Individual Practice Session from August 10

‘2022 is the Goal Now But You Have to be Part of the Process and Play Matches Consistently and Perform’: Jhulan Goswami