On This Day: In 2019, Meg Lanning Registered Highest T20I Score

On This Day: In 2019, Meg Lanning Registered Highest T20I Score

Meg Lanning had missed the Ashes in her own backyard due to solder injury and after two years she reclaimed her reign. Her score in the ODI series was 16,18 before playing a knock of 69 which was overshadowed by Perry’s 7/22 to hand England their largest defeat.  In the one of the test in spite of ammasing 78 runs in two innings, it was not like Lanningsqare. She was searching for big runs.

She was getting frustrated and was not happy with her progress. Despite the half centuries, the player like the caliber of Lanning who want to dominate the oppositions failed to raise that mark. Two years earlier England defeated Australia in the T-20 series, based on the batting brilliance of Danni Wyatt who scored two centuries in 3 matches.

Australia had 6 points leads prior to the T2o series. Even a clean sweep in the T20 series would not help England to regain the Ashes. But the Southern Stars was in the mood to give an inch to the arch-rivals. The county Ground at Chelmsford was known to be the fortress of England as England was invincible in the 8 T20I matches they played in that ground.

Moreover, Australia who was looking for their first victory in any format of the game in that ground too. On a Friday afternoon, a year ago, Chelmsford, ‘The Fortress’ not only witnessed the wrath of the heat which was unusual in the UK but at the same time wrath of Meg Lanning.

Winning the toss, English skipper Heather Knight invited Australia to bat first. Australia lost their destructive opener, Healy, in the very first over. Meg Lanning, whose last half-century in T-20 came in September 2018 came out to bat at number 3. Lanning’s first boundary came in the last ball of the third over she chipped Brunt through square leg boundary.

It was followed by another two to left-arm spinner Eccleston. Ecclestone, the leading spinner of the English line up was dealt with disdain by Lanning when she was conceded 2 fours and a six over in her 2nd over, conceding 25 runs in her 2 overs. She was struck on the helmet in the jaw area by the ball being fired in from the field by Nat Sciver as she stretches to make her ground.

Unmoved by the blow, Meg Lanning completed her half-century came in 24 balls by sending Anya Shrubsole to the boundaries in consecutive deliveries. Mooney and Lanning added 134 runs in 70 balls before Mooney fell to Ecclestone. The ball was coming to the bat well and the fast outfield made the work of fielding side more difficult.

If left-arm spinner was dealt with disdain, Laura Marsh was not spared too. Marsh who went for 12 in her 2 overs came to bowl the 12th over. The first ball was a full-toss on the leg stump which was dispatched for six and the next one went flying over mid-wicket region. Two sixes were followed by two fours in the same over, taking Lanning’s core to 79. 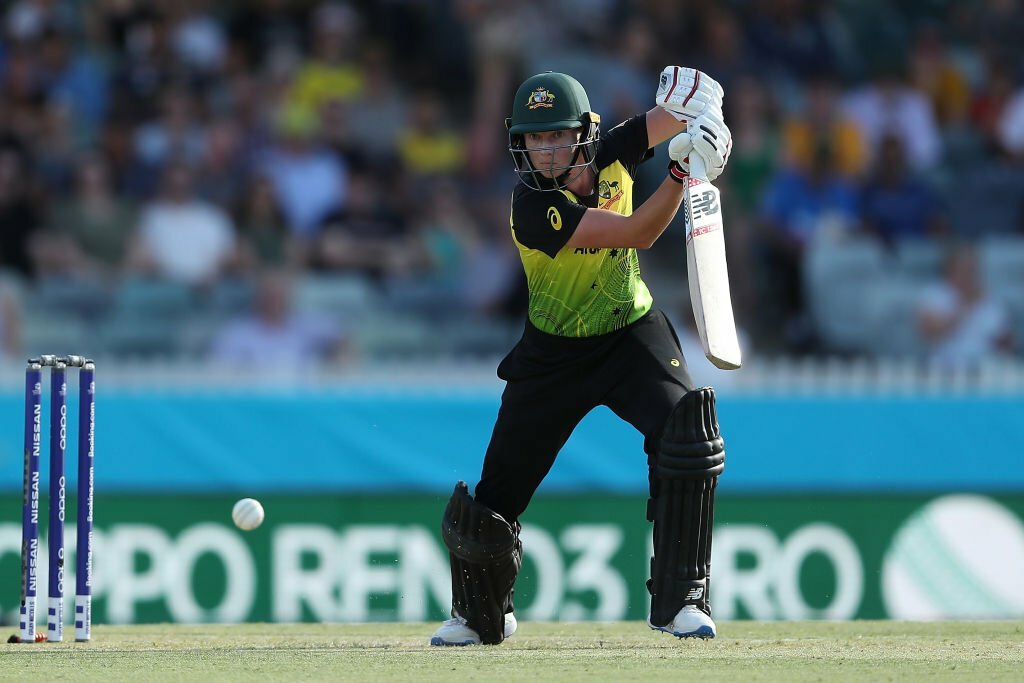 She tried out news strokes which was unusual for her and that produced her maximum runs. You don’t see Lanning hitting six through long on to a left-arm spinner, every day. But that day, Lanning had a Midas touch. Meg Lanning completed her 2nd century in the shorter format of the game with a six to Shrubsole in just 51 balls. Lanning assault continued as Shrubsole conceded 4,4,6 in the last three balls of the over.

England skipper helplessly used all the weapons in her armory but Lanning spared none that day. Lanning’s unbeaten 133 from 63 balls is the highest by any skipper in T-20 format. It was the highest score in T-20 as well, surpassing her own record until her teammate Alyssa Healy overtook that. Lanning’s slaughter took Australia to a total of 226.

Chasing a mammoth total, England lost both the openers within 2 overs and was reduced to 22/4. Though lower order led by Lauren Winfield, Nat Sciver, Katherin Brunt and a late blast from Laura Marsh helped England to cross 100 runs mark. England was never in the chase. Ellyse Perry and Megan Schutt took 2 and 3 wickets respectively to hand England their largest defeat in T-20 format by 93 runs.

Bangladesh Players to Start Their Individual Practice Session from August 10

‘2022 is the Goal Now But You Have to be Part of the Process and Play Matches Consistently and Perform’: Jhulan Goswami