“It Was Awesome To See Stokesy Talk About The Women’s IPL,” – Heather Knight

“It Was Awesome To See Stokesy Talk About The Women’s IPL,” – Heather Knight

Indian Premier League has been playing a crucial role to provide talented players throughout the years since its beginning in 2008. As far as Women’s Cricket is concerned, a three-team Women’s T20 Challenge do take place but it certainly doesn’t have that much impact. However, England all-rounder Ben Stokes said that a full-fledged Women’s IPL will exalt women’s cricket in India. And, England captain Heather Knight praised him for this.

“It was awesome to see Stokesy talk about the women’s IPL,” she said. “The more allies we have in women’s cricket, it really helps to change perceptions. It’s great from Ben to say that and I totally agree, I think it would be amazing for the women’s game to have an IPL,” Heather Knight was quoted by ESPNCricinfo after hearing Ben Stokes’ reaction about the women’s IPL.

“You’ve seen it in Australia with the Big Bash, and hopefully here with the Hundred having men’s and women’s competitions alongside each other, it’s a really positive thing for the women’s game and really helps to progress things. It was really nice to see Ben make those comments,” she again said.

In a recent chat with Red Bull’s Decoding Athletes series, Stokes said: “If you look at where the women’s game has gone to, especially over the last four or five years – I’m very hopeful that there’s a women’s franchise side associated with every men’s franchise side because to be able to grow the women’s game even bigger what better place than to do it out here in India?”

In 2018, the BCCI has started the Women’s T20 Challenge with an exhibition game and later, one more team was added as well – Trailblazers, Supernovas and Velocity. However, both Australia and England have their domestic leagues – Women’s Big Bash League (WBBL) and now-defunct Kia Super League (KSL). And, these tournaments have been providing several quality players which help to have a strong pool of players as well.

Meanwhile, Heather Knight has won the WBBL with the Sydney Thunder and also won the Kia Super League twice. She, however, praised the ECB’s step to bring a new format in the form of The Hundred. Both men and women’s edition will take place together where the first game of the season will be a women’s clash between Oval Invincibles and Manchester Originals.

“When you switch on the Hundred as a young girl. you’re going to see men’s cricket and women’s cricket put on the same pedestal, the same branding, matches at the same venue, etc. I think that’s great and really important to do that, to change perceptions of getting people involved in cricket. If you’re a young girl and you see people like you playing cricket at the highest level, that’s going to encourage you that it’s a sport for you,” she added.

“Little things like playing the first-ever game of the Hundred as a women’s game is a really big step. It’s going to be a huge summer and hopefully, the competition goes really well,” Heather Knight concluded. 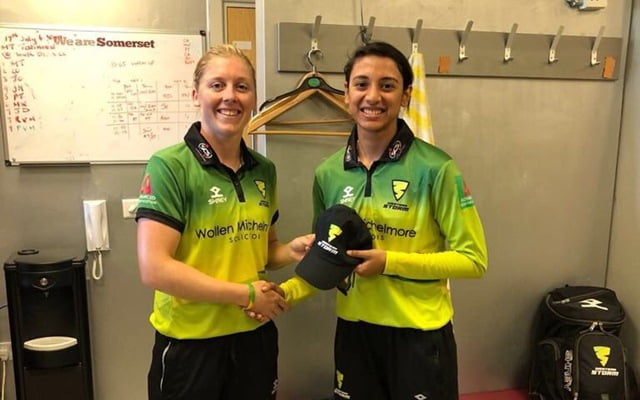 Meanwhile, swashbuckling India opener Smriti Mandhana also backed the thought of having Women’s IPL. She feels that this is the right time for Women’s IPL as it will definitely help in building a strong squad.

“The league definitely gives a boost to women’s cricket and gives confidence to youngsters. We’ve seen in men’s cricket; debutants are facing 145-150 speed deliveries quite comfortably. You can’t see that they’re nervous on their debut. The league has played a big role in that, and it’s going to help women’s cricket as well. If you really want to get a strong women’s team in India, it’s the right time to get a women’s league,” she further added.