Sydney Thunder won their first-ever WBBL title in the inaugural season when they had Sixers in the final by 3 wickets. Though they have played two semis final in between, it took them 5 more years to reach their next final and claim the next WBBL title in the sixth edition. By reclaiming the trophy they became the third side in the history of the tournament to win the trophy twice after Sydney Sixers and Brisbane Heats. It is a massive turnaround for them, from last year’s performance, where they have finished at 6th place with 5 victories out of 14 matches.

Two stalwarts of the Sydney Thunder, Alex Blackwell and Rene Farrell had taken retirement from the game, after last season, leaving a void in the side. Naomi Stalenberg and Rachel Priest too moved to Hobart Hurricanes. Skipper Rachael Haynes who has not in good touch, last season, was given the task to climb the mountain with a bunch of young guns. But along with her international comrades, she not only did justice to the responsibility but brought back the trophy after 5 years. And there have been several key factors for this turnaround.

Rachael Haynes and Heather Knight lived up to the expectations: 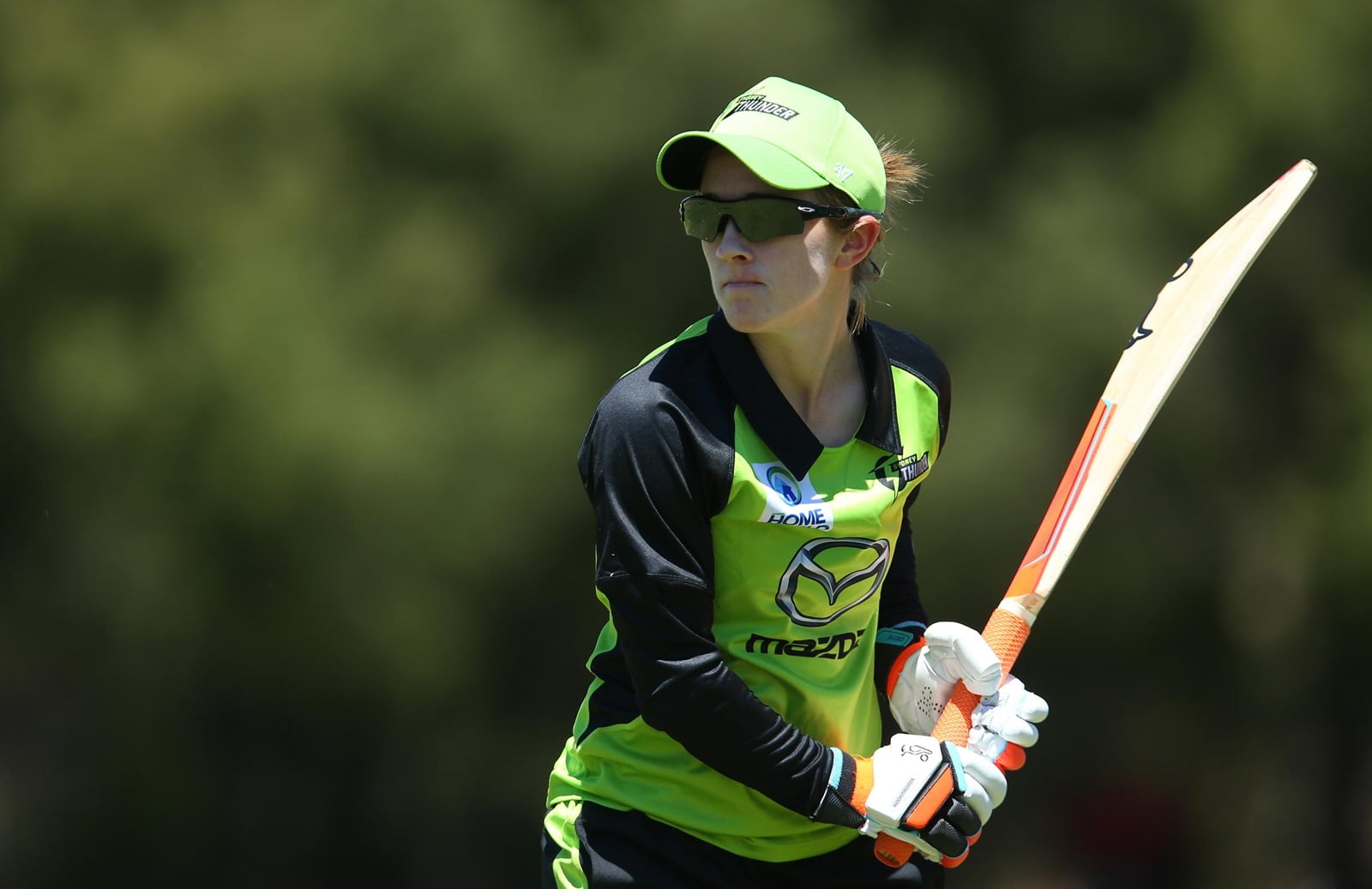 Rachael Haynes led from the front.

The Thunders is the youngest side in the tournament and has 8 out of 15 players, aged 20 or younger. Haynes knew that a lot will depend on how she and Knight bat. Unlike many of the teams who were top-heavy, she gave Trenaman a go in the top of the order while she batted in the middle order to consolidate the innings. She didn’t have a great time with the bat either in the top of the order, in the previous season. She had scored only scored 166 runs in 12 innings. So she backed herself with the work she has been doing for the National side, in the shorter format- the role to finish the match.

Sydney Thunder coach Trevor Griffin said that without the stalwarts of the game, his side lacked the experience so they had decided to bring in some overseas experience to support the skipper, Haynes. Griffin has won two KIA Super League titles with West Storm in England and asked Heather Knight to join the Thunders. Knight topped the batting chart for Hobart with 282 runs with 2 half-centuries last season.

After going through various options Thunders decided to stick with Beaumont and Trenaman opening pair in the latter half of the tournament. However, on only three occasions the duo added more than 30 runs for the opening wicket and their highest came in the rain-affected match against Heats. They added 71 runs for the first wicket which led the team to put on 80 in 12 overs.

But the rest of the matches rested on these two. Both of them have scored 47% of the runs in total, while all the 6 half-centuries came from these blades. The batting revolved around the partnership between Knight and Haynes. They had two 100 runs stand in both the matches, Thunders won convincingly. Even in the final, the duo made an unbroken stand of 33 runs in 23 balls to win the title.

Knight lit up the side with her knocks like 83 against Strikers which took the score to 190. Her 58 against Renegades or 57 against Scorchers at number three gave the Thunders the early boosts. She batted according to the situation and didn’t bog down by the wickets that were falling around her. Her 446 runs at an average of 40 came at a strike rate of 125 along with 4 half-centuries.

Haynes on the other hand was more composed, playing the role of an anchor with her 337 runs. Sydney Thunder won 9 matches this season and Haynes scored more than 30 runs in 5 of those matches. Her unbeaten 48 in the Semi-final against Heats allowed her team to put up a decent total and clinch a remarkable victory. In the final too, she came out to bat at a moment, where a wicket or two could have exposed a fragile batting order. But she stood her ground for an unbeaten 21 to seal the victory. Along with her batting, Haynes had a major responsibility to led a much younger side and Haynes passed that exam with flying colours.

Sydney Thunder youngsters stood up in the crucial moments:

Apart from Haynes and Knight, the other members of Sydney Thunder stood up whenever their team needed the most. Rachael Trenaman got starts on several occasions, though she failed to capitalize on those. Tammy Beaumont though failed to find the grove, in the last two matches, showed what she can do for the side. A brilliant fielder, Beaumont saved runs for her team. Phoebe Litchfield had another good season for the side, which earned her a contract of two more years.

Sixth wicket falls! 😱 Sutherland smokes one but Rachael Haynes does very well to intercept it.

Her 46 against Sixers, failed to win the match, but it showed what Litchfield can do on her day. Her three boundaries against Erin Burns in the last over took the match down to the wire. This teenage, left-hand batter is a huge prospect for Australia in the coming years. Wilson gave assurance behind the wicket, while Lauren Smith’s whirlwind batting provided the firepower that was needed in the dying overs.

Rene Farrell took retirement after the last season and, Lisa Griffith had joined the rivals before the tournament. So Thunders had the names like Shabnim Ismail, Sammy Jo Johnson, and Hannah Darlington to rely on. Darlington was the Young Gun of the season, last year while South African Ismail had a decent season with the ball. They included Sammy Jo Johnson from Brisbane Heats, who had won two titles with them in consecutive years. While Jo Johnson picked up 18 wickets for the Heats last year and played an instrumental role in their successive victory, Ismail’s economy was 5.88 last season with 13 wickets.

While Haynes used Ismail and Johnson in the initial overs, she used Darlington in the death. The combination of Ismail and Johnson turned out to be too hot to handle for the opponents. Ismail, one of the fastest bowlers, hit the deck hard with her short pitch balls, making life miserable for the batters. In this tournament, she completed her quota with 10 overs most of the time, still ended up being the bowler with the most number of dots.

Though she picked up only 14 wickets, she choked the batters with her outswingers as well. In the final, her spell of 2/12, shattered the Star’s top order. She ran faster and pitched the ball fuller than she used to do. The pitch assisted the seamers in the initial over and, she picked up the precious scalp of Villani and Meg Lanning. She troubled Lanning repeatedly around the fourth stump line before finding a nick from her bat.

Seven wickets down! Sammy-Jo has two 🔥

Sammy-Jo Johnson, the highest wicket-taker of the tournament with 22 scalps turned out to be the perfect partner for Ismail. While Ismail relied on pace, Johnson’s out swings asked questions to the batters. In the final, too she picked up Mignon du Preez, the most dependable bat in the Stars line up, in the power play. She has been consistent with her approach. She picked up 3/25 against Strikers and 1/ 27 against Hurricanes to win both the matches in the last weekend o qualify for the Semi-final.

Her 2/14 and 2/11 in the semi-final and final, respectively, helped Thunders in the crucial moments. In the semifinal, Sammy Jo-Johnson picked up in-form Georgia Redmayne in the initial overs while wrapped up the innings by picking up Delissa Kimince.

In the last 7 innings, Darlington picked up 16 wickets with an average of 10, out of which she had picked up 3 wickets in 4 instances. Her figure of 3/24 was enough to bundle Hurricanes within 120. In the semifinal, Heats were all poised at the end of 15th over. Darlington had got Heats skipper Jess Jonassen earlier, came back later to pick up Charlie Knott and Georgia Prestwidge in one over. Heats’ dream was shattered. The seam trio took 55 wickets with an average of 16 in this tournament.

Sydney Thunder didn’t have big names in the spin bowling department. Sam Bates had a decent last season. Along with her Lauren Smith too joined the ranks. While Smith picked up 8 scalps, Bates with her phenomenal left-arm spin took 18 wickets. Haynes used her in the power play and she restricted the batters from going big. In the match against runners up of the previous season, Strikers, the duo of Smith and Bates helped Thunders to win the match by 56 runs. While Bates took two wickets, Smith was the pick of the bowlers with her 3/26.

In the rain-affected match against Heats, defending 45 runs in 5 overs, Ismail went for 11 in the first over. Bates came to bowl in the 2nd over against the hitters like Jonassen. Against everyone’s expectation, she delivered a maiden over which increased the run rate. Her two wickets in that over were icing on the cake. The Thunders went on to win the match by 14 runs.

In the very next match, she had impressed once again. Defending 144 she removed Devine in the fourth over. Bates closed out her four overs with two wickets in two balls to take her tournament tally to seven. In the semi-final, her two wickets were crucial ones. In the very first over of her spell, she got rid of Grace Harris. Harris went for the cut, but miss read the ball which, came in with the arm. And then in the 17th over, she removed Laura Harris, who was batting on 37 from 17 balls. She went for her trusted reverse sweep, but the ball took an edge and tickled to the wicket. That wicket turned the fate for the Thunders.

Apart from these two Heather Knight too chipped in with her off-spin. The highest run-scorer for the Sydney Thunder also served the side with her off-spin bowling whenever it was required. With her golden arm, she picked up 10 wickets with an impressive strike rate of 14. One can remember her bowling against the Heats when she picked up 3 wickets in an over, giving away only 4 runs in a rain-affected match.

Griffin succeeds Joanne Broadbent in 2019 as Thunders coach. He had already won two KIA Super League titles with Western Storms in 2017 and 2019 while leading them to the final four in 2016,2018, making the side the most successful in the Kia Super League’s history. Griffin who had a good relationship with skipper Rachael Haynes managed the experienced players like Knight along with the bunch of young players.

He had also worked along with Knight in KSL and the familiar core group helped the thunders in the longer term. he has worked under Broadbent as an assistant coach and he takes great interest in women’s cricket. With this victory, the always smiling Griffin got the trophy in the most celebrated women’s league as well.