Diamonds Win Help Katherine Brunt Get Over With Saturday’s Frustation

Diamonds Win Help Katherine Brunt Get Over With Saturday’s Frustation

The Northern Diamonds have comprehensively swept over the Rachael Heyhoe Flint Trophy in a thrilling interlock against the Lightning at Kibworth with the high-winding strokes of Alex MacDonald and Jenny Gunn. This chilled-with-thriller helped the England star, Katherine Brunt swipe out the utter disgust and frustration of the first match in the latter one.

Brunt showed her excellence with four flaunting wickets in her entire spell of 10 overs at an overwhelming economy of 2.3. This added flavours to the convincing win of her side as Diamonds went on to defend 152 runs, putting the Leicestershire countryside on fall-short circumstances of 6 runs along with 11 balls remaining on the board.

“We are very happy to have scraped one back because it certainly wasn’t a nice feeling at Headingley the other day,” said the flaunting seamer Brunt to northerndiamonds.co.uk, where she went on to add, “We won 80 percent of that, and it was really hard to take. So we knew we had to come back and play our hearts out.”

This was the first registered win in a second attempt. The first of the attempts shook the Northern Diamonds on Saturday when a defeat much ripping came across their way with a two-wicket-loss to the Central Sparks at Emerald Headingley. That was supposed to be a welcome win for the visitors where they crumpled down to just 196 for the fall of 8 in a way to chase 280 runs on the mark.

With having an odd slip even when only 30 mere runs were left for the opponents to drive the game away, the Diamonds side showed much valour on their part where they got to recover from 6 wickets down to 50, that further hilled to 151, prior to getting hold of their nerves with every single delivery where the Lightning needed just 13 off 18 balls with only two tail-enders left to bat yet. And the count descended down to only 1 with only 8 left for the last two dead-overs.

She hinted at the lack of cricket being put on the ground and they are “still a bit scratchy.” Despite the present scenario with a lesser number of games being played, it’s really great to see the squad propelling on the ground and canvassing with such a power-grinding performance. The latter side, despite not being able to get hold of the pace of the wicket, delivered really well to the existing conditions, along with the top-edges and the early drives. 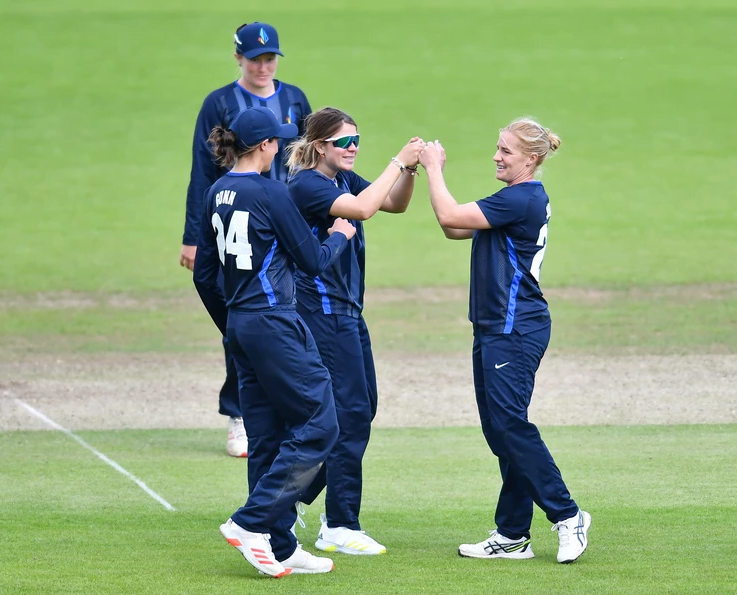 “For me, I started a lot later than everyone else and have only just been bowling outdoors for the last couple of weeks,” Katherine Brunt remarked along with hinting at, “these two games are my first two, and it’s been a massive challenge for me because when I’m playing, I’m used to being on it from ball one having bowled loads in the nets.”

On her escalated performance, she exclaimed that it’s all about doing one’s best, acknowledging the fact that it will probably get better. She was happy to further her level of performance by 10 percent better than what she had on Saturday. Meanwhile, she said that she adores representing Yorkshire, here as a Northern Diamonds player as well. But she stated that performing for the Diamonds, is not a smaller task also.

“I have been playing for Yorkshire since I was knee high, and I love it,” said the veteran pacer. “I still feel as nervous as I do playing for England. I said to the girls before the game (against Lightning), ‘I feel really nervous today, I feel sick’.”

“I’ve never not felt like that in my career. Even if it’s a third-team game and I’m helping out or it’s an Academy practice game, I still get nervous because there’s as much expectation in those games as there is playing for England. But I just love representing my county and playing with my mates from back home,” she continued.

However, this nearing Saturday is going to be the last fixture for the Diamonds’ Katherine Brunt, Nat Sciver and Lauren Winfield-hill against the Sunrisers at Cambridge, before they move on to lock horns with India starting with a thrilling one-off Test match from June 16. She will play against Sunrisers at Cambridge on Saturday as well.

Katherine Brunt further added: “Saturday, you can’t really judge. It was the first game of the season and you don’t know how things are going to go. Things will get better. We will gain a lot of confidence from Monday’s game. We have a great squad, and it will click. Once all the England players have gone, I reckon we’re in with a really good chance. Of course, there will be challenges along the way and it will be tough. But I don’t see any reason why we can’t make the finals again in this and the T20. It’s going to be really exciting to see.”