Chasing a modest total of 133 runs in the first match of World T-20 in 2002, Australia was 58/2 after nine overs. Alyssa Healy was batting on 44 from 32 balls and had spent enough time to lunch the counter-attack. Indian skipper Harmanpreet Kaur sensed that match was slipping from her hand, so finally brought her ace bowler into the action. Poonam Yadav has been India’s go-to bowlers for the last couple of years, and this leg spinner has rescued India from difficult positions in the shorter format of the game.

Haynes took a single form the first ball, which was a well flighted one, Healy pushed the next one to long-off and Haynes did the same for a single in the third ball. Healy completed her half-century as she dispatched, Poonam’s full toss for a six over dip midwicket.

Poonam Yadav was quick to realize her mistake and pulled the length back for the next one. Besides, she delivered it slow compared to her previous ones. Heally came down the track to play the ball to her leg side and closed the face of the bat. The ball took the outside edge of the bat, and Poonam took a brilliant catch, diving to her left. Australia lost their 3rd wicket and India never looked back from there.

In her next over Gardner hit Poonam for a four and took a single in her next ball. Haynes was on the strike. Poonam lobbed up a wrong’un. It lured Haynes to come out and, it went past the outside edge. Bhatia completed her formalities. Australia was 76/4 and in the next ball, it became 76/5.

Ellyse Perry, the only player on the planet who has 1000 runs and 100 T-20 Wickets under her kitty, was sent back to pavilion for a golden duck. Poonam again opted for the googly and, Perry decided to step out in the very first ball. The ball came in and sneaked past the outside edge to rattle the stumps. 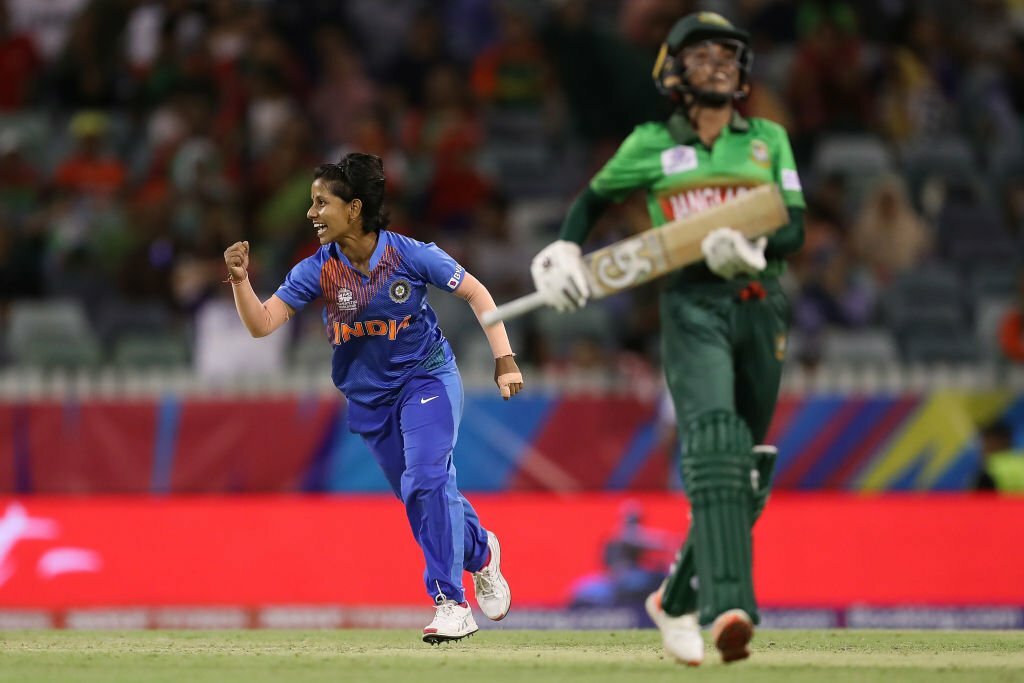 Poonam Yadav was on a hat-trick. Jess Jonassen came in. It was another googly, and as double J followed the ball, it took a healthy outside edge. Tania Bhatia who was having a wonderful outing behind the stump failed to gather the ball correctly. However, she didn’t have to wait long for her 4th wicket as she removed Jonassen in her next over.

Australia never came out o the double blow they suffered in the 12th over. Poonam Yadav with her 4/19 led India to a seemingly impossible victory of 17 runs. Australia lost their last 8 wickets in just 48 runs, the collapse that was triggered by Poonam Yadav.

Poonam made her debut for India in 2013 against Bangladesh in Ahmedabad where she picked three wickets giving away just 15 runs in 10 overs. But in the next three years, she only played 7 ODI’s. The girl from Agra got regular opportunities in the Women World Cup Qualifier in 2017 and till World Cup, she picked up 20 wickets. This pocket-sized dynamo along with the other two – Rajeshwari Gayakwad and Ekta Bisht has made life horrible for batters.

She became the regular member of the Indian ODI side who was in dire need of quality leg spinners. One, who trusts her googlies and love to flight the ball more, Poonam has picked 72 ODI wickets with an average of 21 and an economy less than 4.

But her brilliance was more prominent in the shorter format of the game. No one has taken more wickets in T-20’s than her after her debut in that format. She also holds the record for the highest wickets in the T-20 World Cup for India (28 wickets in 18 matches). In the 2018 and 2020 World Cup, India depended on her and she gave India 18 wickets, giving away 247 runs in 40 overs.  Based on her performances Poonam Won the Arjuna Award in 2019.