T20I Tri-Series Review: A Good Experiment for Australia, India and England ahead of the ICC World T20 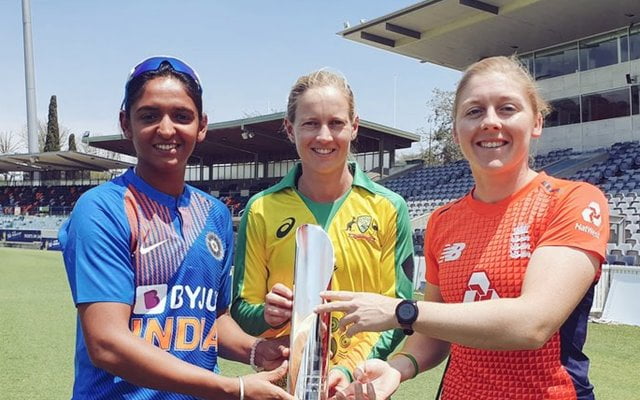 As the ICC T20 World Cup is around the corner, three of the best teams – Australia, England and India got the chance to experiment their strengths and work on their loopholes in the recently-concluded ICC T20I Tri-Series. This has helped them in their run-up to the final as well.

Women’s CricInsight looked at the possible review of the series:

After their victory in the 2018 World Cup, mighty Aussies have played 14 matches, while winning 11 out of them. They lost one T-20I in the Ashes and two in the recently concluded Tri-Series.

However, despite all the hiccups in their team, they went on to win the Tri-Series final where it seemed that the Indian side was in control of the match. Australian side in their first match very had almost clinched the victory against England’s side. Anabel Sutherland hit 11 balls 22 to take the match the super over. Though Australia won their next match, based on Ellyse Perry‘s all-round performances, India defeated them in their next match by 7 wickets. They won their next two matches to clinch the title.

Beth Mooney, who scored 208 runs with an average of 52 will assure them at top of the order. On the other hand, the repeated failure of Healy who was in tremendous form before this series can be an area of concern for them. Healy has scored only 15 runs in 5 matches. However, Healy has assured her fans that she will be back in runs in the World Cup.

Ashleigh Gardner, Ellyse Perry will be in charge to consolidate the middle order while Rachael Haynes will stick to her role in the team. In the previous edition of the World Cup, she played a crucial role with the bat at down the order. In the tri-series, she scored useful 24 of 21 balls and unbeaten 18 from 7 balls which turn out to be useful in the context of the matches.

While the batting line up which projected their strength down the order too will assert their dominance in the World Cup, lack of runs from Meg Lanning and Healy will keep the management in worries. Australian Management has given chances to everyone in their squad except Erin Burns. Allrounder including Dessila Kimince, Nicola Carey and Sophie Moniluex all played their role in the team.

Both the spin (11 wickets ) and pace (20 wickets ) department has delivered when the team wanted result form them. In the final, India has required 41 runs from 35 balls. Meg Lanning gave the ball to Megan Schutt and Jess Jonassen and both of them removed two set Indian batters Smriti Mandhana and Harmanpreet Kaur within a span of an over.

Apart from the seasoned campaigner, younger players like Vlaemnic who has impressed with her speed and Anabel Sutherland who shown with her all-around abilities, have pleased the management as well. Having said that, the two matches they have lost, their bowling department didn’t click, which was expected from them.

In their first defeat, they conceded 115 runs in their last 10 overs and in their 2nd defeat against India in the group match they had conceded 100 runs in their first 10 overs. When this Australian bowling attack came under attack, they looked wayward. If this problem gets solved, with the kind of form they have and their never-say-die attitude, Australia can hope to win the title again.

Despite they lost the final match against the mighty Aussies, from a place, where it looked like India can win the match, there are positives that India can bank on. India won two matches in this series and that too based on the performances of the top -order. Smriti Mandhana has become the highest scorer of the tournament and Shafali Verma has shown that she can be a match-winner on a given day.

Jemimah Rodrigues too has played useful knocks, and Harmanpreet stood till the end to snatch the victory. Indian spin department has done well, and that too without their main spinner Poonam Yadav. Gawakyad, playing her first match after almost 2 years, delivered well with 10 wickets in 5 matches. She stood up with her performances whenever she was asked by her team.

Except one over in the final she was economical and picked up wickets in power plays as well. Radha Yadava and Deepti Sharma supported her well while Sikha Pandey, the lone wolf who spearheaded the pace department also has lived up to the expectation. However, middle-order remains the area of concern for the Indian team management. None apart from the top four got the run in this series.

The fact that there is none to be trusted with the bat after Harmanpreet in the batting order created immense pressure on her. She tried to play till the end, and that has hampered her natural game. Most of the time she came to bat at 7 or 8th over and got out in the 14th -16th over, which resulted in the lack of depth in the batting order. That has resulted in a decline in her strike rate as well which has come down to less than 100 in this series. Apart from that Indian seamers didn’t get many chances to exploit the chances which can turn out to be crucial in the upcoming World Cup.

Despite winning the same number of matches as Australia and India, England failed to reach the final of the tournament due to the Net Run rate. England lost their first matches against India and then won against Australia in super-over. None of their openers got the start in this series; therefore most of the cases its the middle order which took control of the game.

They lost both of their openers within powerplay in 3 matches out of 4 matches they have played. Its Nat Sciver, Heather Knight and Fran Wilson who came to their rescue in most of the cases. Knight has scored 176 runs in 4 matches with a strike rate of 140. She led the middle order to put up a total to defend.

England has demoted Tammy Beaumont down the order to fix their middle order but if their opener continues to fail like this, they can consider pushing Beaumont to the opening slot. The management will look forward to both of their openers for the kind of start they have provided before.

England seam bowling attack comprised of Brunt, Shrubsole and Sciver look solid. They haven’t tried Kate Cross in this series but she can be useful in the World Cup as well. Heather Knight with her spin has made life difficult for the opposition batters. Sophie Ecclestone and Sarah Glenn have picked up 5 wickets each but they were economical, which will assure England management in the middle overs.

The mega tournament will begin from February 21 in Australia.